As a sand casting foundry, Rinborn Machinery Co., Ltd could provide OEM design service. We can produce the desired casting parts by your samples, drawings, or just your rough ideas. 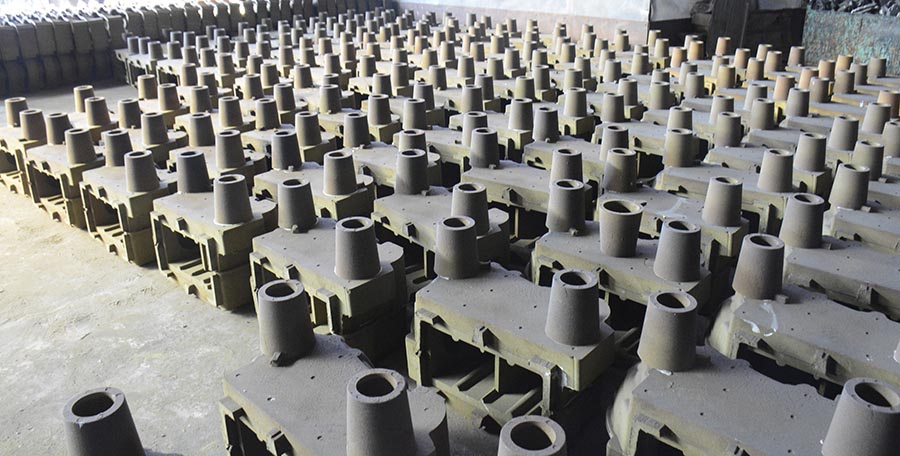 Metal casting is the process in which molten metal is poured into a mold and allowed to solidify into an object. The object that results from this process is also called a casting. In sand casting, sand is used to define the cavity inside a mold. In addition, sand is used to make any cores that are contained in the mold. The molten metal solidifies in the cavity between the interior of the mold and the exterior of the core. There are the five basic steps to create a sand casting.


Patternmaking
The first step in sand casting is patternmaking. The pattern is a replica of the exterior of the casting with dimensional allocation for shrinkage and finishing. If the casting is to be hollow, additional patterns called cores are used to create these cavities in the finished product. Patterns are usually made of wood, plastic, metal, or plaster; however, other materials or combinations of materials are used if there are additional specific properties required of the pattern. The number of castings to be made from the mold and the specifications required of the finished casting are two of the criteria that determine which material is selected for the creation of the pattern.

Coremaking
The next step in the process is coremaking. Cores are forms which are placed into the mold to create the interior contours of the casting. They are typically made of a sand mixture- sand combined with water and organic adhesives called binders- which is baked to form the core. This allows the cores to be strong yet collapsible, so they can be easily removed from the finished casting. Since cores are made in molds, they require a pattern and mold, called a core box. The core pattern is made in the same fashion as the casting pattern, but the core box is created from a durable material like metal or wood. Since the cores are made of sand, the mold cannot also be made of sand.

Molding
Molding is the multi-step process in which molds are created. In horizontal casting, the mold is contained in a two piece frame, called a flask. The upper portion of the flask is called a cope and the lower portion is a drag. First, molding sand is packed into a flask around the pattern. After the pattern is removed, gating and runner arrangements are positioned in the drag half of the mold cavity and the sprue is placed the cope portion. Gating systems are necessary for the molten metal to flow into the mold cavity. Cores are also placed in the drag portion of the mold if they are needed. To finish the mold, the cope (top) section is placed on the drag (bottom) section, and the mold is closed and clamped together.
In Metal Technologies' foundries, molds are created in large automated molding machines (Disamatics), a process which warrants its own detailed explanation.