The purpose of the sprue is to provide a channel for molten metal alloy to reach the mould once the wax has been burnt. The sprues are generally made of wax. The diameter and the length of the sprue depend largely on the size and type of the pattern, the type of the casting machine to be used and dimensions of the ring.

The diameter of the sprue former should be approximately the same size as the thickest part of the wax pattern. Too large sprue for a particular pattern could cause its distortion, while too small sprue could causes localised imperfection - porosity.

It is considered that the ideal position for the sprue is the point of the greatest bulk of the pattern (i.e. largest sectional area of the pattern), in order to avoid problems of distortion of thin patterns. Position of the sprue can also be based on the clinician's preference.

The sprue connection to the wax pattern is generally formed in a flared shape for high density alloys, and is restricted for low density alloys. As mentioned above, the sprue should be ideally attached to the part of the pattern with the biggest cross sectional area – it is preferred for a molten alloy to flow from the thick section into the thin ones. This approach also minimises possibility for turbulence. The length of the sprue former should be long enough to locate the pattern suitably within the casting ring, sufficiently far away from the trailing surface, but not too long so not to cause too early solidification of the molten alloy.

Patterns may be sprued either directly or indirectly. For the direct sprues, there is a direct connection between the pattern and the crucible former. This is usually used for casting of single and smaller patterns. A reservoir sphere can be added to the sprue to prevent problems with localised shrinkage in the patterns. In cases where multiple single units or fixed partial dentures are cast, the indirect spruing is adopted whereby a reservoir bar is located between the patterns and the crucible former. The volume of the reservoir should be greater than the volume of the pattern. As it is located in the centre of the heated casting ring, and because of its large volume, the reservoir should solidify later than the patterns. 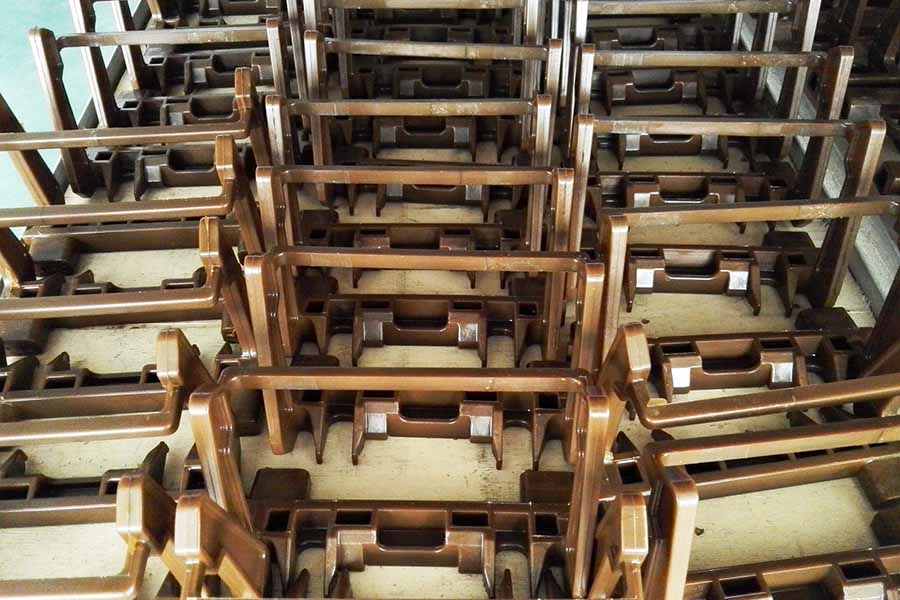